The “endless summer” dream is a reality for high school choir and band performing tours that choose to travel to Southern California. Gazing at the stars (in the sky and on the big screen), walking barefoot on the beach and sharing an amusement park experience with the most famous mouse in the world are just a few of the possibilities in Southern California year round.

At Paramount Studios when the Hollywood sun sets, the historic 65-acre lot darkens. This is the time to experience the mysteries of the Paramount “After Dark Studio Tour.” Beginning at dusk, a Studio Page will walk you through the moonlit streets of the backlot and lead you to exclusive areas never before seen by the public. As you venture deeper into over 100 years of Paramount history, you’ll lose yourself in the vast sound stages, vintage film vaults, and hidden passageways of our legendary studio. 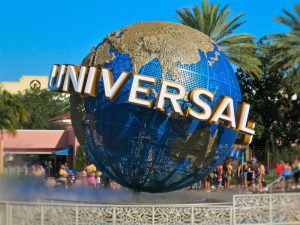 The grandest Southern California studio experience is Universal Studios Hollywood. VisitCalifornia says that “on a sprawling complex on the east side of the Hollywood Hills, this movie-studio-meets-theme-park blends a behind-the-scenes studio tour with rides that swoosh, swoop, and dive through movie-and-TV-themed worlds.

Your students will step inside the park’s front gates where they can choose from the Despicable Me Minion Mayhem ride, the zombie-filled Walking Dead Attraction, or the popular WaterWorld show, which highlights real-life stunt actors. Take the escalator to the park’s lower lot and encounter rides based on Jurassic Park, Revenge of the Mummy, or the Transformers. Head to the right, and soon arrive at The Wizarding World of Harry Potter™, complete with a recreation of the village of Hogsmeade.” Dinner and shopping at CityWalk tops off the day.

The Beaches and Sights of Southern California

California dreaming truly takes place on the beaches of Southern California. Whether your students crave excitement and amusement style entertainment at the Santa Monica Pier, people watching and shopping at Venice Beach on the Boardwalk or a walk on the historic Manhattan Beach Pier which is 928 feet long and one of the west coast’s most famous working piers, their desires will be fulfilled.

Educational attractions featured in Southern California include the California Science Center, the home of the Endeavor Space Shuttle, Griffith Observatory where students can look at the sun, moon, visible planets and other objects and try out a variety of telescopes.The Santa Monica Pier Aquarium is Heal the Bay’s public marine-education center located at the world-famous Santa Monica Pier. The facility is home to more than one hundred species of marine animals and plants – all found in the Santa Monica Bay.

A visit to Southern California wouldn’t be complete without seeing a performance at the Hollywood Bowl, walking through the Dolby Theatre where the annual Academy Awards Show takes place, participating in a tour of the University of California Los Angeles (UCLA) followed by a concert at Royce Hall built in 1929 or the experience of seeing a show at the Walt Disney Concert Hall, the home of the Los Angeles Philharmonic. Performances and clinics with local schools are also encouraged.

Student music festivals are scheduled throughout the Anaheim area during the spring each year. Amusement parks such as Disneyland, the California Adventure Park, Knotts Berry Farm and Six Flags Magic Mountain are located nearby festival venues. Packages including park admission may be arranged.