Boston is “More Than a Feeling”, as the iconic rock band of the 70’s, formed in the city of the same name, would say. Historic Boston is filled with endless educational tour opportunities, a destination that produces amazing events throughout the year and is home to a multitude of unique venues that are perfect for high school bands and choirs looking for fresh locations to perform in. 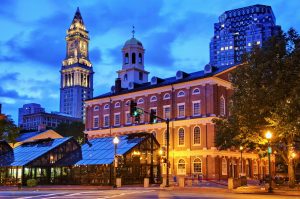 This city is host to some of the most well-known parades and celebrations in the United States. It is also a place where you can find a bit of the eclectic if your group is in search of activities that are out of the ordinary.

Since 1901, when the very first celebration of Evacuation Day was held, the one and only St. Patrick’s Day Parade has taken place in South Boston. It began on the 125th anniversary of the day General George Washington and the Continental Army forced the British to end the occupancy of Boston. The tradition continues today. Bands are invited to submit an application to perform in the parade and it is truly an honor to be chosen.

A multi-day 4th of July festival in Boston, Harborfest showcases the colonial and maritime heritage of the historic city of Boston. The award-winning festival strives to honor and remember the past, celebrate the present and educate the future with reenactments, concerts, historic tours and much more. Over two hundred daily events during the festival are hosted in Boston’s historic downtown and waterfront districts. Harborfest is considered to be the largest patriotic celebration in the United States. This is a great time to be in the city and perform. 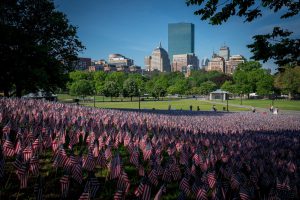 Ready for the eclectic…

Lilac Sunday at the Arnold Arboretum has been a Boston tradition for over a century. This is one of Boston’s most beloved springtime events. The festival is centered on the peak of the flowering season and delights visitor’s young and old. The arboretum’s one of a kind lilac collection includes 369 plants representing 165 different kinds of lilacs.

Led by the Harvard Marching Band, the parade will begin on the Boston Common at the Parkman Bandstand and end in the Public Garden near the famous “Make Way for Ducklings” sculptures. Bring your camera – the parade is possibly the most adorable thing you’ll ever see!

Quite a few of the oldest performance venues can be found in the city of Boston.

Perform in H. H. Richardson’s 1877 architectural masterpiece on Copley Square, one of the most significant architectural landmark in America. The church invites visiting music groups to perform as part of the church service. Tour the art and architecture of the historic building prior to your performance.

Perform in Boston’s oldest surviving church building and a Boston Freedom Trail site. This is the church where two military men climbed the steeple with two lanterns that the held high as a sign from Paul Revere that the British were coming by sea. This ignited the American Revolution. Choirs only.

An outstanding National Historic Landmark building that is a colorful example of Northern Italian Gothic architecture. The building was completed in 1875 and is distinguished by its tall bell tower, brown, pink and grey stonework. The church’s choir features jazz and gospel.

Perform in one of the most vibrant, historic and central locations in Boston, a unique and burgeoning array of shops, restaurants and outdoor entertainment. The marketplace attracts over eighteen million visitors a year.

Hard Rock Café in Faneuil is one of the city’s largest entertainment destinations with more than 16,000 square feet of space and a 514 seat restaurant. Enjoy an authentic rock-n- roll dining experience at this theme restaurant.

The next hot Boston destination for shopping, dining and playing. Outlet stores, dining, movie theatres and LEGOLAND Discovery Center, a six acre waterfront park and more. Perform in the outdoor amphitheater while overlooking the Mystic River.

Built in 1900, acoustically it is considered the finest in the United States. Visiting performers can perform for and be coached by at Boston Symphony Orchestra musician on stage. A Boston Symphony insider will offer behind-the- scenes and an insider’s view of what it’s like to be a professional musician.

Indoor and outdoor venues to perform at including one that is next to the Mayflower II. A new outdoor performance venue overlooks the 17th Century English Village and Cape Cod Bay. Another new outdoor pavilion for performing is next to the Artisan Craft Center and Plimoth Bread Company.

One of Boston’s most dynamic outdoor spaces. On Saturdays it hosts the Greenway Open Market, a local arts market that features local artists, crafters and designers. The park is fifteen acres and over a mile long, the greenway is Boston’s rooftop garden that is highly trafficked for groups to perform in. This is just a taste of what there is to see and the opportunities for exploration that educational tour groups and performance bands and choirs that travel to Boston can experience.

Are you interested in learning more about our Boston educational tours and performance options? Chat with one of our travel experts to learn more about the amazing opportunities that await with Educational Discovery Tours!