In Costa Rica, the most commonly used phrase to describe the lifestyle and local personality is “Pura Vida”. Literally meaning “Pure life”, this saying goes beyond its simple translation. “Pura Vida” is a way of life. It symbolizes the idea of simply enjoying life and being happy, and is a synonym of “hakuna matata” which reflects the relaxed lifestyle of Costa Ricans. 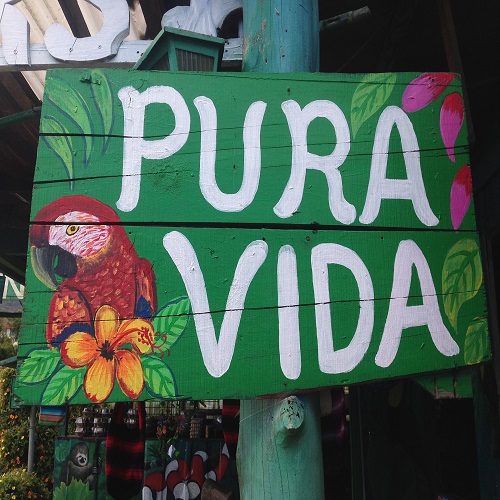 From the moment students traveling Costa Rica immerse themselves in the day to day living routine of the locals, they begin to feel a sense of peace and joy. At the same time, the excitement and anticipation of each new adventure and experience is exhilarating. From food to fun, this small country has so much to share.

Costa Rica prides itself on sustainable cuisine. Meal options range from the traditional to the innovative at restaurants, markets and farmers markets. Dining establishments use a variety of natural and organic products. Meals can easily be tailored to meet any budget, taste and level of demand.

Public student performances may be scheduled at local restaurants such as Ticquicia Restaurant where groups frequently dine after a tour at the rocket company in San Jose. 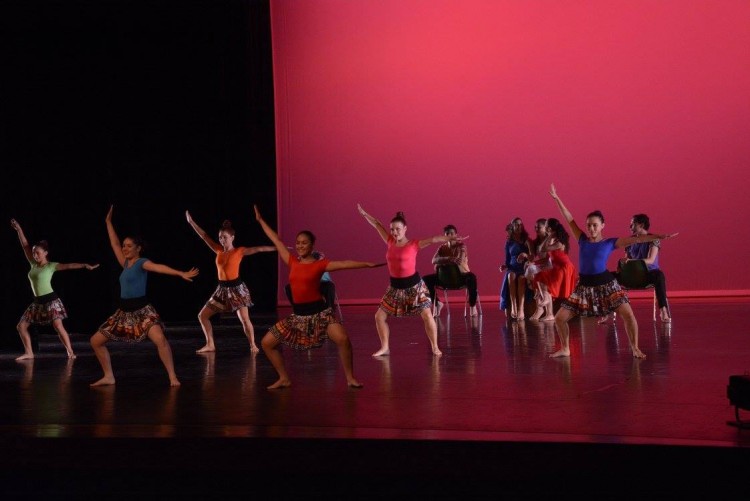 Visitors are encouraged to take a little piece of the Costa Rican soul home with them through crafts made by the hands of Costa Rican artisans.

Artistic expressions of music, dance, theater, cinema and audiovisual production are distinguished for their professionalism and quality. Concerts and theatre productions may be included in group itineraries.

Built between 1890 and 1897, the National Theater is home to valuable pieces by Italian artists and is still in beautiful condition after more than 100 years. The pride of Costa Ricans, the Theater is the center of the country’s main cultural, artistic and political activities, and was declared a National Monument in 1965.

The old Bellavista Barracks, known today as the National Museum of Costa Rica, houses natural history, pre-Columbian gold, and native archeological collections. Its walls hold more than 120 years of history including the abolition of the military in 1948 and the 1910 opening of the national herbal exhibit and its hundreds of collections.

Public student performances can be arranged base on availability as well as musical collaborations with local schools.

The experiences of community-based rural tourism take you inside the lively culture of rural communities; there also are private ecological reserves, farms and areas of interest, or sites close to areas of environmental and cultural interest, with tourist services.

While Costa Rica is a small country, it is home to 4% of the earth’s biodiversity. Costa Rican’s are not only proud of this fact, but they take sustainability very serious. More than 25% of the country is protected in a national system of conservation areas. 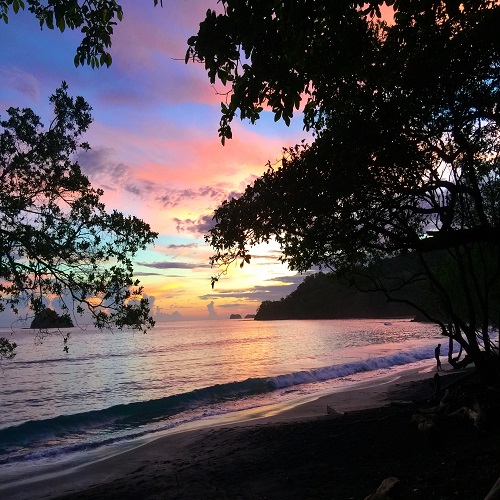 Costa Rica’s beaches are surrounded by forests, and have great natural diversity. Many contain beautiful coral reefs, perfect for diving and exploring. Depending on the beach, activities may include hikes to mangroves, diving, surfing, sport fishing, hiking on trails or horseback rides.

With easy access to many beaches, you can make the most out of both coasts. Most have warm water throughout the year, so they can be enjoyed year round. While its territory of 19,652 square miles touches both the Caribbean Sea and the Pacific Ocean, the country is surprisingly accessible – it only takes three hours to travel from coast to coast by car. 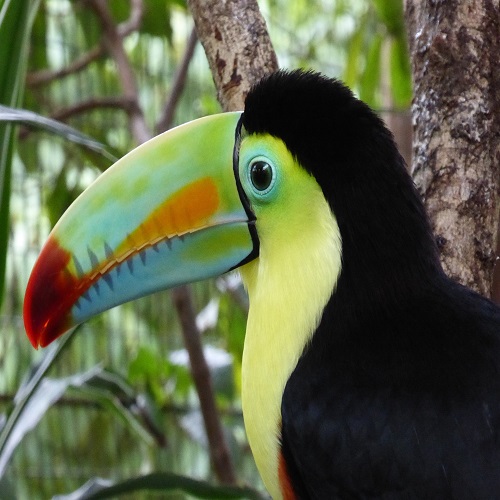 An estimated five billion birds migrate through Costa Rica every year. Over Costa Rica, birds converge from the Arctic Circle, Alaska, the Canadian tundra, the U.S. Great Lakes and the east and west coasts of the United States. As you sleep or go about your daily routines, legions of birds are passing overhead.

Because most birds migrate at such high altitudes, they aren’t visible to the naked eye and scientists use radars to detect them. Thanks to their excellent vision, migrating birds use groups of stars to orient themselves in relation to the horizon. Some sense the Earth’s magnetic field. Others sense low frequency sound produced by the breaking surf or the prevailing winds over the topography.

The Costa Rican ocean shelters more than 6,700 marine species, 90 of which are unique on the planet. Costa Rica protects coral reefs, beds of seagrass, a thermal dome, an oceanic trench more than 4,000 meters deep, and an underwater mountain range larger than the Talamanca, Guanacaste and Central Volcanic ranges combined.

There are few natural spectacles more impressive than the massive arrival of sea turtles. At night, turtles will gather near the coast in preparation for their departure from the water to come ashore in an extraordinary effort to lay their eggs and thus ensure the next generation. They return to the same beach where they nested before, guided through the vast ocean by instincts and skills difficult to understand.

Crocodiles, squirrel monkeys, a rare jaguar and many more animals roam free throughout the country and can be observed as your group explores.

You can’t get far while traveling Costa Rica without coming across a National Park. The Poas Volcano is one of the world’s largest geysers with a crater width that is just short of one mile. Usually included on a Costa Rican travel itinerary, the National Park is currently closed due to volcanic activity. Previous to now, the last eruption was in April of 2017.

Approximately one hour from the Poas Volcano is the Doka Estate coffee plantation. Tour guides share their knowledge and information about how Costa Rican coffee is cultivated and produced at this amazing location in the shadow of the volcano. Guests learn the process of growing from seed to pour what is sometimes called the best brewed coffee in the world. Included in the tour is a stop at the beneficio, the oldest working water mill in the country.

Bands and choirs desiring to create a team building experience at the estate will love the activities available that include ropes courses, “Survivor” type workshops, music and theatrical workshops. Also, public student performances may be scheduled.

The Cano Negro wildlife reserve is one of the most important reserves for incredible bird and wildlife observation in Costa Rica. It is the home to many sloths, monkeys, caimans, bats and numerous tropical plants. With a welcome drink and snack in hand, you will slowly cruise the national refuge where you’ll enjoy the flora and fauna.

Baldi Springs is the most expansive hot springs in the Arenal Volcano area. Here, you will enjoy hot and cold pools, gardens and cascading waterfalls. It’s the perfect way for students to relax after spending the morning on a boat quietly observing nature.

The hanging bridges are located on the same corridor in Arenal that is followed by birds migrating between North and South America. The six bridges give you vantage points of a river and waterfalls while placing you as close as you can ever hope to get to the migrating birds, lush vegetation and the beautiful flowers of Costa Rica’s primary rain forest. Easy to walk trails take you to the heart of the forest.

Selvatura Park Canopy Tour is one of the longest Canopy Tours in Costa Rica. It’s a total adrenaline rush! Guides take you through each of the fifteen cables, eighteen platforms and on the exclusive Tarzan Swing. The suspended cables between platforms allow you to fly between the trees and see the wildlife up in the treetops. It is the only park located inside the virgin cloud forest of Monteverde. 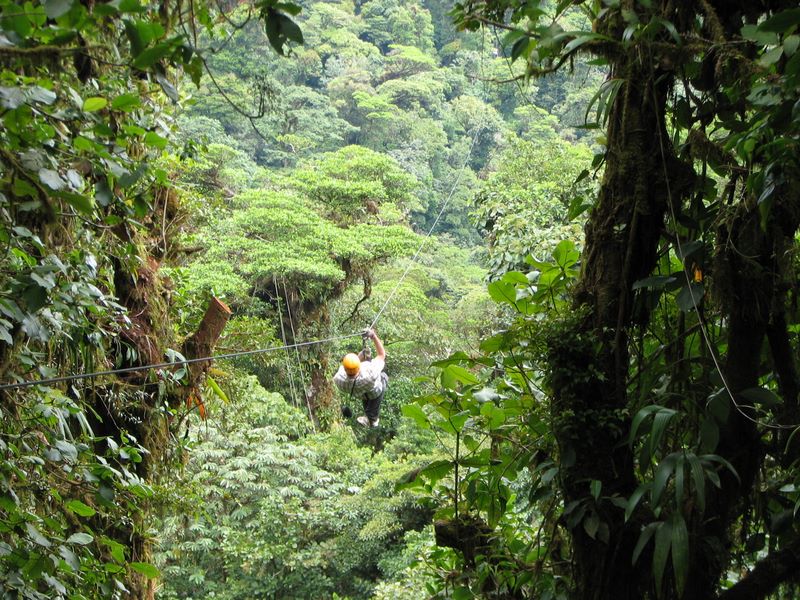 The Monteverde Cloud Forest Reserve is one of the most famous conservation areas in Central America. It is a tropical rain forest but due to its altitude (4,600 feet) it’s called a Cloud Forest. A cloud forest is a highland forest characterized by nearly 100% humidity throughout the year. The forest receives over twelve feet of rain each year and is home to unique and rare animals. These include jaguars and pumas as well as over 450 species of birds.

Our scientists will teach your students about the development, impact, and the importance of the growing aerospace industry in Costa Rica.  During the tour you will hear about the research and development of the VASIMR® propulsion system, see some of the experiments that are being conducted, as well as the latest designs of the first spaceflight model.

Your group will also get the opportunity to see the company’s work with renewable energies, such as an H2 production, usage, and storage system that they are currently developing which will have a tremendous impact for global energy independence.