In New Orleans, your performing students can be part of a variety of activities, from marching in a Mardi Gras parade to performing alongside top-notch professional musicians. Students will not just have fun and enjoy an unforgettable musical experience, but also learn about the unique culture and history of the birthplace of jazz.

A City of Rich Cultural History

A wild, jubilant sound, jazz is a melding of many cultures, sounds, and styles that developed in New Orleans for over 300 years. New Orleans was founded in 1718 as a French Louisiana colony. Despite being sold to the U.S. around 1803, the colony kept it’s unique Creole culture – Catholic and French-speaking.

New Orleans was also home to many people of African descent, making up half of the population by the end of the 1700s. Compared to the Protestant and English-speaking citizens of other U.S. colonies, New Orleans’ unique mix of cultures brought a liberal appreciation for food, wine, dancing, and especially music.

Each ethnic group, including the arrival of German, Irish, and Italian immigrants, contributed to the development of early jazz. The African-American culture, with their roots in blues, arguably became the biggest contributor towards jazz.

In the early 1900’s popularity for brass bands in parade settings grew across the U.S. In New Orleans, many of these parade band members doubled as dance band members. But what drew crowds most was improvised music. Through the popularity of improvisation, brass band arrangements, and New Orleans blues, jazz was born. 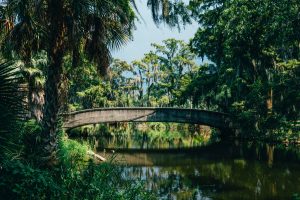 Besides performing, students can learn more about the history of New Orleans and jazz by visiting some of the city’s most iconic landmarks.

The New Orleans Jazz Museum is the place to explore jazz in all its forms. This museum features over 25,000 jazz artifacts (including Louis Armstrong’s first cornet), interactive exhibits, educational programming, and engaging musical performances.

Students can experience the excitement of Mardi Gras throughout the year in an extensive tour of Mardi Gras history. Take a peek behind the mask and see how the extravagant floats and costumes of Mardi Gras are made.

The National World War II Museum is located in the Business District of New Orleans, where students can relive the memories, sights, and sounds of WWII.

Explore the best destinations of the French Quarter, from visiting the oldest cemetery in New Orleans, the City of the Dead, to trying a beignet, and enjoying street artists and local shops.

New Orlean swamps are a habitat for exotic wildlife not found anywhere outside of Louisiana. Your students have the opportunity to tour these magnificent environments and observe the creatures and plant life that call New Orlean swamps their home. Learn tales of pirates who once hid their treasure in the swamps and legends about swamp creatures who lurk beneath the waters.

Tour the plantations of New Orleans’ agrarian past. See inside the beautiful mansions that were once called home. Your students will get to hear stories from all perspectives of the plantation lifestyle.

The birthplace of jazz legend Louis Armstrong, students of all ages can tour New Orleans and play at unique venues. Possible student performance venues include:

If there had to be a national park for jazz, it has to be in New Orleans. Your students will celebrate the origins and evolution of jazz in this incredible historical park experience.

This scenic amphitheater overlooks the beautiful St. Louis Cathedral and the river. Students will not want to miss outperforming in this picturesque location.

If you’re interested in taking your band, choir or performing students on a New Orleans performance tour, review our itineraries to learn more about our suggested trip highlights!