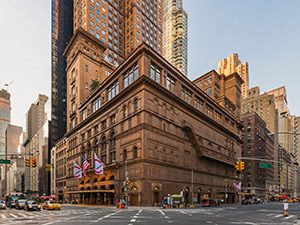 A guided tour of Carnegie Hall including tales of its fascinating history, amazing architecture and legendary sound is a must for student performing groups visiting New York City. Music performance tours to Carnegie Hall are always a big win with students.

The story of the music hall began in the spring of 1887 when wealthy industrialist Andrew Carnegie and his new wife Louise Whitfield made a cross Atlantic voyage to Scotland. On the ship they met the young Director of the Symphony Society of New York, Walter Damrosch, who had a dream of creating a New York City Music Hall. The Carnegies were always looking out for philanthropic opportunity and after hearing of Damrosch’s vision initiated a friendship and partnership that would last a lifetime and lead to the building of Carnegie Hall.

High School Music Tours will be fascinated by the Carnegie structure that is now a National Landmark and a Historical Preservation Site that houses three performance spaces: the Isaac Stern Auditorium / Ronald O. Perelman Stage, seating 2,800; the 599-seat Judy and Arthur Zankel Hall and the 268-seat Joan and Sanford I. Weill Recital Hall. Band Directors, Choir Directors, Orchestra Conductors and Music Ensembles will see assembly rooms which, according to the program from the Main Hall’s Opening Night, would be “suitable for lectures, readings, and receptions, as well as chapter and lodge rooms for secret organizations.” The building, with its striking Italian Renaissance–style façade of terra cotta and ironspotted brick, was completed in the spring of 1891.

The five day opening of Carnegie Hall that spring attracted such notable guests as the Rockefellers, Sloans, Whitneys and Fricks. They each paid $1-$2 dollars to hear performances.

Band tours and choir tours should also plan to attend a concert or presentation at Carnegie Hall while on a New York City High School performance trip.