“You can do it in Portland, even if you’ve never done it before” is the Travel Portland website’s tag-line and rightfully so. Few destinations offer as much for performing students to do as Portland does, including the headlining Portland Rose Festival. 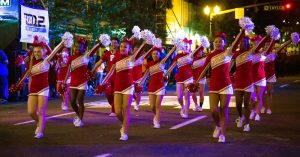 The Portland Rose Festival is an annual event that has been hosted each June in the city for more than a century. Originally started to promote tourism to the region by claiming Portland as the “summer capital of the world” the event has grown to consistently welcome over one million people to the city each year. Three parades (that bands and choirs may apply to participate in), concerts and an urban fair packed with great entertainment, good food and fantastic features are highlights of this “must see” festival.

Powell’s City of Books: From humble storefront beginnings in 1971, Powell’s City of Books has grown into a Portland landmark and one of the world’s great bookstores. Covering an entire city block, Powell’s contains more than one million books. Students can grab a map to the nine color-coded rooms and explore the largest independent used and new bookstore on Earth.

Saturday Market: Enjoy a distinctive experience at Portland Saturday Market, the nation’s largest weekly open-air arts and crafts market. Students will stroll down row upon row of unique creations made by the people who sell them, and enjoy live music and international snacks.

Oregon Zoo: At the Oregon Zoo, you can travel around the world in an afternoon, observing more than 2,000 animals from around the world, from agouti to zebra. This conservation zoo is renowned for its Asian elephant breeding program.

Pittock Mansion: Pittock Mansion soars 1,000 feet above the city’s skyline. A century-old symbol of Portland’s dramatic transformation from a small lumber town to a bustling city, it’s an architectural wonder. With picture-perfect views of rivers, forests, bridges and mountaintops and 23 treasure filled rooms no other place in town offers a more revealing glimpse of Portland’s past. 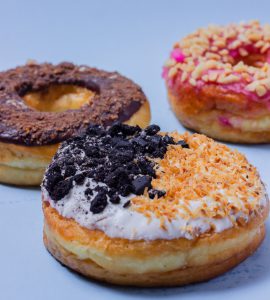 OMSI: One of the nation’s leading science museums, OMSI is 219,000 square feet of brain-powered fun. Five enormous halls will bring science to life for students with hundreds of interactive exhibits and displays. You can experience an earthquake, take part in live lab demonstrations, explore the universe in a world-class planetarium and even tour a real submarine.

Voodoo Doughnut: Located in Old Town’s popular nightlife district, Voodoo Doughnut is one of the city’s most unusual and delicious culinary destinations. The doughnuts, topped with creative ingredients such as bacon, Captain Crunch and Oreos, are almost as fun to look at as they are to eat. Locals and visitors line up for what may be the most innovative doughnuts in the world.

Rose Test Garden: Portland’s International Rose Test Garden is the oldest official continuously operated public rose test garden in the United States. The garden’s spectacular views and more than 8,000 roses make it one of the city’s most notable signature landmarks.

Japanese Garden: The Japanese Garden is a haven of tranquil beauty which has been proclaimed one of the most authentic Japanese gardens outside of Japan. Encompassing five separate garden styles, over 10,000 individual rose plants in 650 varieties, the garden also includes an authentic Japanese Tea House, meandering streams, intimate walkways and an unsurpassed view of Mount Hood.

Making Portland Your Next Stop

Portland is a landmark city with a great variety of activities and sight-seeing for band students traveling to festivals and performance tours. Contact us to find out why the Portland Rose Festival should be a must-see festival for your students!