Our band’s adventure began when our plane landed in Edinburgh, the capitol of Scotland. After meeting our exclusive guide for the next ten days, we visited The Palace of Holyrood House. Commonly referred to as Holyrood Palace, it is the official residence of the British monarch in Scotland, Queen Elizabeth II. Other famous residents of the palace include Prince Charles and the infamous Mary Queen of Scots. It is an architectural delight in a park-like setting surrounded by lush and colorful gardens.
We boarded a double decker bus for the next part of our Edinburgh tour, Princess and George Streets. Princess is one of the major thoroughfares in central Edinburgh and the main shopping street in the capital. According to the Edinburgh Evening News, this is “the city’s most prestigious shopping district”. 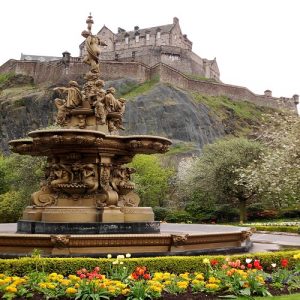 Our visit to the country’s number one tourist attraction, the Edinburgh Castle, was a day of historic exploration and a public performance memory that will never be forgotten. The views of the Edinburgh skyline don’t get any better and being atop the fortress gazing out over the city really allowed us to envision what it must have been like for the royals themselves. We viewed the Crown Jewels of Scotland, the Stone of Destiny, the famous 15th century gun Mons Meg and the One O’ Clock Gun. We also stopped in at the National War Museum of Scotland which is located at the castle.

Getting out of the city and exploring the Scottish Highlands was a real highlight of our international band trip. Driving through the countryside was just as we had imagined, miles and miles of green rolling hills. The best part of the day was a trip to Loch Ness and a cruise on the Loch. Unfortunately we didn’t see Nellie, the mysterious monster, but we definitely looked very hard for her. Stops at quaint towns on the way back to Edinburgh such as Stirling and Inverness rounded out the day.

St. Andrews was a big hit with the golfers in our group. The most prestigious course in the world didn’t disappoint. There is just a feeling of reverence for the game as you walk the old course on the guided tour. St. Andrews is not only the “home of golf”; there are historic sites, museums, an aquarium, theatre and a university.

Evenings can be filled with activity every night. There are jazz clubs, concerts, arts, theatre and many opportunities for public performances throughout the Edinburgh area. The most popular event we participated in with our students was the evening Ghost Tour. Each tour group is led to historic “spooky” sites by a guide that is a mixture of historian and professional entertainer. They say of this tour “you’ll have fun, good company and learn fascinating history while being terrified in the process!”. 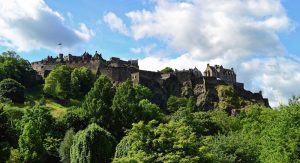 The last tour we took was one of the most fun and educational. I would never have imagined taking a group of students to a whiskey distillery but in Scotland, it’s such a big part of the culture, that it’s quite normal for families to explore and learn the distilling process. At The Scotch Whiskey Experience we were literally able to become a part of the whisky making process as we took a ride in a swirling, bubbling whiskey barrel ride through a virtual distillery.

International Performance Tours for Your Students

Interested in seeing how Scotland might be the perfect destination for your students? Explore our Scotland performance tours and learn more about the activities of Scotland, or take a look at our other international performance tours for a wider variety of options.